The complete guide to getting hired: What every .Net Developer needs to know

Home|The complete guide to getting hired: What every .Net Developer needs to know 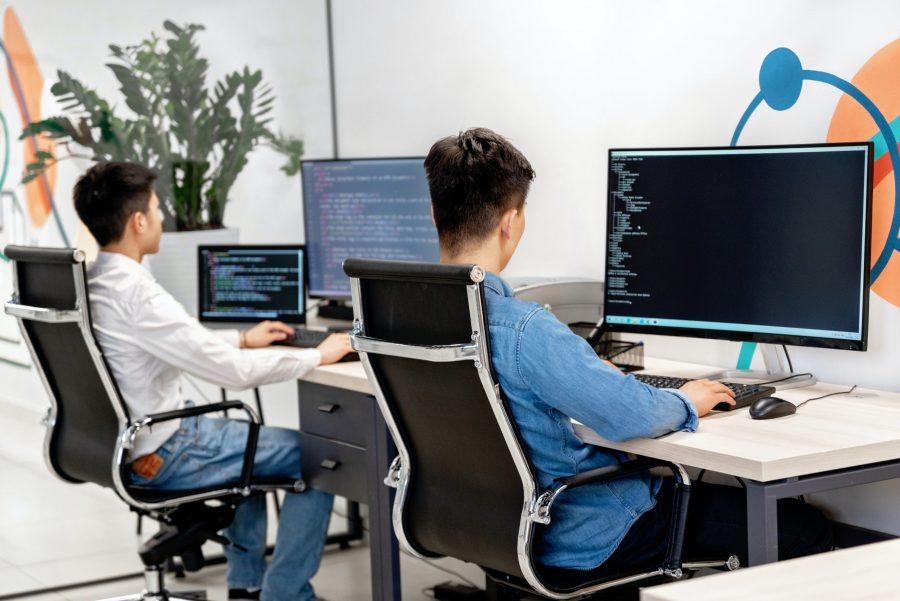 The complete guide to getting hired: What every .Net Developer needs to know

Ever since the .Net open source framework was created by Microsoft in 2002, it has become the organization’s most successful programming language. And with thousands of .Net Developers that have emerged as part of this development, they are in high demand all over the world. With this in mind, there are certain things a .Net Developer should be aware of when looking for a new role. This includes having the right hard and soft skills and being well prepared for the interview process. Luckly, this blog post helps you in your search for a new role by exploring different facets of what you need to know to break into the industry and succeed.

Microsoft developed .Net as a software development framework and ecosystem. It allows for easy desktop and application engineering. Because it is open-source, it is used for a wide range of applications as it provides a controlled programming environment for most software development phases including development, installation, and execution. It shares similarities suuch as the languages’ syntax with the Java platform. However, other languages that the framework supports include C#, Visual Basic .Net, F#, and C++ .Net, Visual Basic,VB.Net, J#, JSCRIPT.Net, Iron Ruby, Iron Python, ASML, and others.

Being familiar with one language, though, is not considered enough. .Net Developers also have a wide range of libraries and frameworks to work with, making it highly straightforward to create a large variety of applications. These “building blocks” help a .Net Developer with custom or proprietary commercial apps and are used in businesses which are involved with enterprise resource planning applications (ERPs), point of sale systems, customer management systems, etc.

What is the .Net Core framework?

Because of .Net’s continuous evolution, we now have the creation of the .Net Core framework. Also open-source and supporting Windows, Mac, and Linux, it addressed prior challenges with porting the framework to other hardware architectures and operating systems. .Net Core should not be considered a replacement of .Net. Instead, they should be looked at as two frameworks, which are being developed in parallel. .Net Core is ideal for new projects made for the browser, the cloud, or other operating systems.

What does a .Net Developer role entail?

As a .Net Developer, you already know that your primary role will be to write applications that use any of the supported languages under the framework. It’s also highly likely that you only specialize in one aspect of the framework, such as ASP. Furthermore, when looking for a .Net Developer role, you need to know exactly what your employer is looking for from a candidate. For example, not all ASP.Net Developers can write applications for Windows or servers. In addition, the skills for the different languages and libraries are also not easily transferable.

With this in mind, you should be aware that you’ll be required to produce code using .Net languages mentioned above; upgrade, configure, and debug existing systems; and provide technical support for web, desktop, or mobile applications. You will also be responsible for designing, tailoring and developing software apps according to your employer’s needs. Continuous development and support will be another feature of your role.

In addition, a .Net Software Engineer is responsible for the analysis of specific problems, potentially providing or developing the appropriate system requirements, which can then be implemented in the design mix of interfaces and components.

They can also take on a variety of other tasks. These may include simple ones such as fixing bugs on an existing product or app or more coplex tasks such as completely building a new app from the ground up.

It’s also important to note that .Net Developers are considered full-stack developers. This means that they work on both the back end and the front end of web applications and it entails critical knowledge of HTML, ASP.Net, .Net Core, C#, CSS, JavaScript, knowledge of web servers cloud hosting with Azure, jQuery, knowledge of databases and database manipulation languages like SQL, visual studio, and many others.

The hard and soft skills a .Net Developer should have

Given the vast responsibilities of a .Net Developer, it’s crucial that they possess a holistic set of both hard and soft skills.

On the hard skills front, they need to be proficient in VB.Net and C# languages or both; they require knowledge of particular .Net framework versions; familiarity with Mono; ability to write reusable libraries; understand object-oriented programming; be familiar with a range of design and architectural patterns and Microsoft SQL; knowledge of concurrency patterns; possess the ability to write clean and maintainable code; possess knowledge of the strengths and limitations of Common Language Runtime; be familiar with the Windows Presentation Framewors; possess knowledge of popular web application frameworks and the fundamental design principles required to develop a scalable application; as well as have experience with building database schemas.

The .Net Developer screening process will begin when you submit your resume to a prospective employer. They will then look for specific skill sets and qualifications that you possess, as well as past experience in the field. As part of the screening process, the recruiter will also look at your knowledge of Azure, .Net languages (C# plus VB.Net or F#), frameworks (ASP.NET MVC and Entity framework), databases (MySQL, SQL Server, Azure SQL), Microsoft Technology Associate (MTA), MCSA (web applications, Universal Windows Platform), as well as your experience with and knowledge of .Net Core.

We’ve collected a list of 30 of the possible interview questions you may be asked to test your knowledge with the .Net framework. These include the following:

With the rapid rise in demand for .Net Developers, it’s crucial that you set yourself apart from others with your skills, knowledge base, and experience. Not every .Net Developer does the same thing or performs the same functions. However, there are commonalities that must be considered in terms of the overarching framework. As a result, you need to be prepared for the interview as best as you can and going over some or all of the possible interview questions will be a great starting point to helping you launch your career.